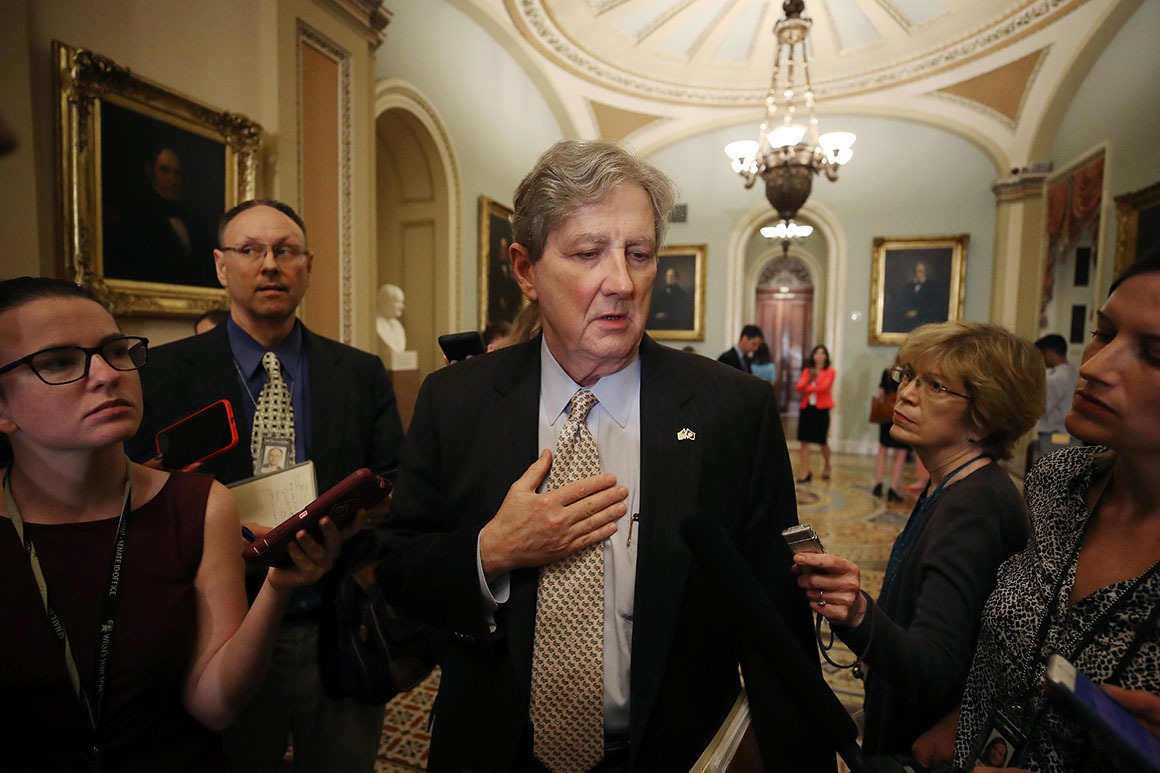 “I gave two press conferences yesterday. I’ve done two interviews today. I’ve said all I want to say,” Kennedy said in an interview. “I believe what I believe. I showed everybody the articles. And reasonable people disagree sometimes.”

While Kennedy’s comments earned him a shout-out from Trump on Twitter Monday, lawmakers have only raised more questions. One Senate Republican, summing up the mood in the conference, put it this way: “I watched it on Meet the Press and I was like: Huh?

“I don’t know what he’s saying. I don’t know if he’s purposefully confusing the issue. I know he’s defending the president and that’s part of what he’s doing,” the senator said.

The Louisiana Republican’s plunge into the world of Trump-backed conspiracy theories stands in stark contrast to previous situations as he’s toed a less partisan line.

He recently skewered Steven Menashi, Trump’s nominee to the 2nd U.S. Circuit Court of Appeals, for declining to answer questions from senators during his confirmation hearing, though he ended up supporting Menashi. He also helped sink Matthew Petersen, Trump’s judiciary nominee to the District Court for the District of Columbia, after grilling him over his lack of courtroom experience. Kennedy was also the deciding vote on a measure to restore net neutrality, joining Senate Democrats, and was critical of Missouri Republican Sen. Josh Hawley’s takedown of a Trump nominee.

Senate Republicans have largely accepted reports from intelligence officials that Russia interfered in 2016. Kennedy also endorses that view. But his contention that Ukrainian’s preference for Hillary Clinton amounted to election interference is now cleaving what was once a consensus on Capitol Hill.

“Our focus at the State department has been, and as it should be, on the proven Russian interference in the 2016 elections and plans to do so in 2020,” Hale said.

Kennedy told reporters this week that he’s simply citing reporting from news organizations like the Financial Times, the Washington Examiner, The Economist, The New York Times and POLITICO.

POLITICO reported in 2017 that some Ukrainian officials “helped Clinton’s allies research damaging information on Trump and his advisers,” but there was no evidence of a top-down effort to interfere in U.S. politics.

Senate Majority Leader Mitch McConnell declined to comment Tuesday about whether Ukraine interfered in the 2016 election, but the Kentucky senator said the Intelligence Committee is free to look into it. Still, Kennedy has a few defenders, including Sen. John Barrasso (R-Wyo.).

“A lot of people around the world have meddled in the 2016 election, and I saw Sen. Kennedy this morning, and he had a list of different publications and ran through them,” Barrasso said. “I think that’s where the information is coming from.”

But Kennedy’s detractors point out that he’s changed his reasoning several times.

“It was really unusual for John. I’ve disagreed with him many times but I respected his reasoning. I can’t follow it this time,” said Senate Minority Whip Dick Durbin of Illinois.

Many Senate Republicans won’t criticize Kennedy directly, though they made clear that Russia, not Ukraine, presents the actual threat to the United States. Sen. Mitt Romney (R-Utah) cited testimony from State Department officials.

“They said there’s no evidence that Ukraine interfered in our election,” the Utah Republican said. “Of course leaders in other countries are pulling for one candidate or another. That’s to be expected but there’s a big difference between pulling for someone … and interfering in the way Russia did.”

Sen. Marco Rubio (R-Fla.), a member of the Senate Intelligence Committee, agreed that it’s common for countries to prefer one presidential candidate over another.

“I think it’s important to distinguish op-eds… from the systemic effort to undermine our election systems,” Rubio said. “There’s no way to compare any other efforts to what Russia did in 2016. … There’s nothing that compares not even in the same universe.”

The Senate will determine Trump’s fate if the House impeaches the president. Most Senate Republicans will likely defend Trump and vote to acquit him in an impeachment trial, but joining Kennedy’s Ukraine theories is a bridge too far for them.

“Everything I’ve seen from the intelligence community and our Intelligence Committee puts it squarely on Russia.” said Sen. John Thune of South Dakota, the No. 2 GOP senator. “Maybe he’s seen something I haven’t … I haven’t seen any evidence.”