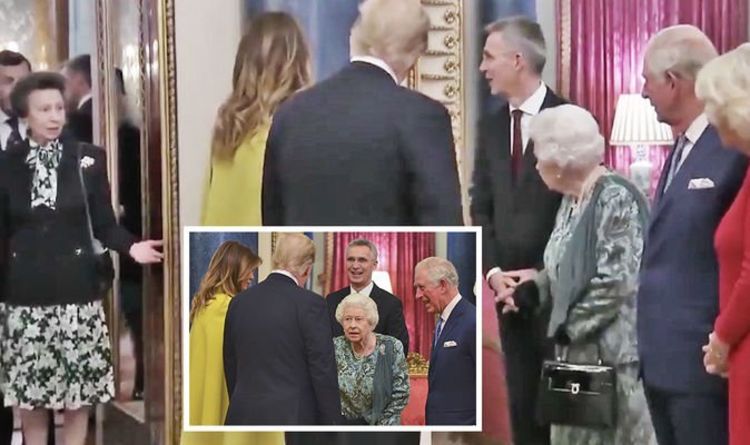 Princess Anne and the Queen have been caught in a video where they appear to be having a silent argument at the beginning of yesterday’s reception at Buckingham Palace. Footage shows the Queen, 93, with Secretary General of North Atlantic Treaty Organization Jens Stoltenberg, Prince Charles and Camilla, Duchess of Cornwall, welcoming and shaking hands with the Trumps.

Princess Anne, the Princess Royal and only daughter of the Queen, can be seen on the left-hand side of the frame, waiting to enter Buckingham Palace’s state rooms.

After greeting the US President and the First Lady, the Queen looks at her daughter, seemingly unamused.

The monarch then appears to be gesturing for her daughter to join the receiving line and point at the Trumps.

Princess Anne, 69, replies to these gestures by widening her arms.

And a third said: “Princess Anne has the right amount of petty lol”.

Princess Anne also appears in another video shared on Twitter in the aftermath of the reception, held by the Queen ahead of today’s Nato summit at Watford.

While the name of Mr Trump isn’t pronounced, the world leaders can be heard speaking about a politician holding a long impromptu speech, leading many to think they were speaking about the US President.

In the video, Mr Johnson can be heard saying to Mr Macron: “Is that why you were late?”

Mr Trudeau intervenes, saying: “He was late because he takes a 40-minute press conference off the top!”.

Mr Macron then speaks and gestures animatedly, but his words are barely audible.

The Canadian leader can later be heard once again, seemingly speaking about the same person the group was chatting earlier.

He says: “You just watched his team’s jaws drop to the floor”.

The Queen’s reception was attended by several senior royals, including Kate, Duchess of Cambridge.

Her husband Prince William was absent because he is currently undertaking a four-day visit to the Middle East.

An $8 Billion Refinery? Mexican President Says, Yes We Can – The New York Times