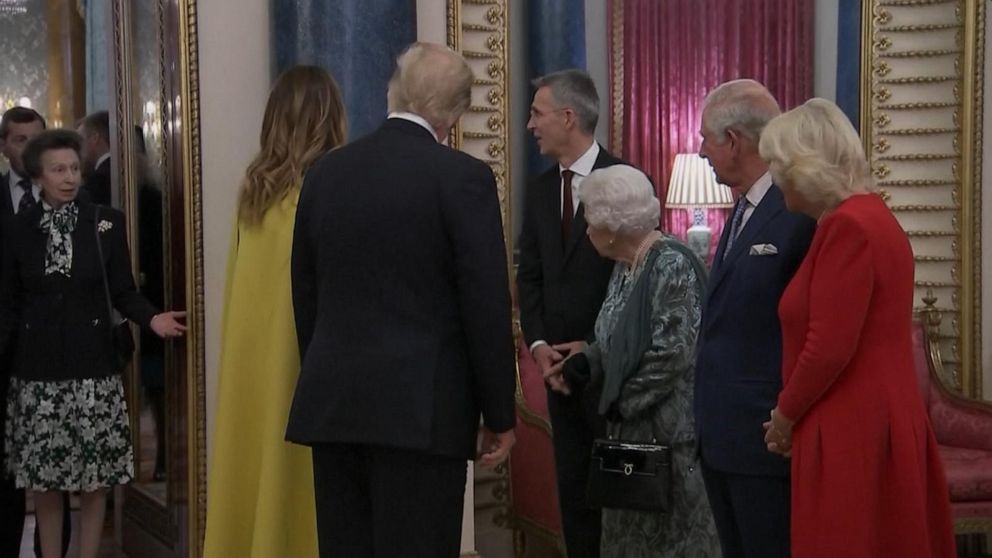 A video shot inside Buckingham Palace at the NATO reception on Tuesday has garnered mass attention on social media after people called into question a gesture between the queen and her daughter.

President Donald Trump and first lady Melania Trump shook hands and spoke with Queen Elizabeth II, Prince Phillip, Prince Charles and the Duchess of Cornwall while the queen’s daughter, Princess Anne, was standing off to the side with the reception line.

In the clip, which has been viewed and shared by thousands on Twitter, the queen appeared to turn to Anne who shrugged in reply prompting the president to laugh.

Princess Anne shrugs in response to scolding from Queen Elizabeth for not being in the reception line for Trump as a senior royal. Amazing. 😂😂😂 pic.twitter.com/0TBK76leap

Some considered the moment to be an awkward interaction or misunderstood moment, while others interpreted it as royal shade.

From comical to critical, here are a few of the mixed reactions on the internet.

I’m going to tell my kids that this was Princess Anne watching the Queen greet Donald Trump pic.twitter.com/D6LCaX6wHB

Rep. Ted Lieu, D-Calif., chimed in on Twitter, writing, “What Princess Anne did was unnecessary and disrespectful.”

But others were quick to remind him that there is a standard operating procedure with reception lines.

“You’re totally mis-reading the situation,” one Twitter user replied. “Princess Anne’s was more of a helpless ‘what do you want me to do?’ gesture.”

Another echoed the sentiment and added that it’s hard to make any assumption “without knowing the whole context of the interaction.”

“It’s clear the Queen is done talking to [President Trump] and gestures to move the line along. Princess Anne is next in line and doesn’t want to step forward…and is respectful,” the user said.

Making an assumption w/o knowing the whole context of the interaction might not be accurate. For me, it’s clear the Queen is done talking to @realDonaldTrump and gestures to move the line along. Princess Anne is next in line and doesn’t want to step forward…and is respectful.

One reporter for The Times of London wrote a comprehensive thread with a hot take on whether Princess Anne snubbed Trump or not.

OK, here goes… Princess Anne: the truth. No, she didn’t snub the Trumps. And she wasn’t told off by the Queen.
1/5

Whether the moment was “a mood” or a misunderstanding, it certainly got folks talking.