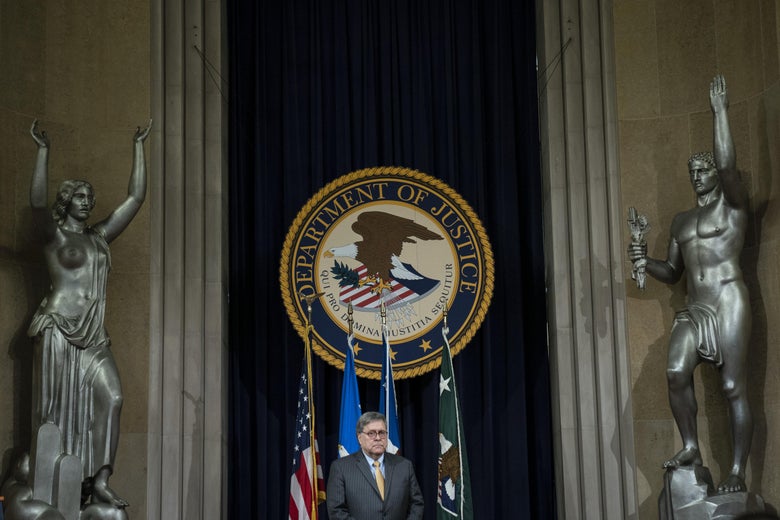 Attorney General Bill Barr suggested in a speech Tuesday night that continued police protection for certain “communities” in the United States could ultimately depend on those communities showing more “respect and support” for law enforcement. Barr’s comments were made as part of speech at a DOJ award ceremony for “distinguished service in policing.” The meaning of the potentially incendiary remarks isn’t totally clear, so let’s start with what the attorney general actually said.

“I think today, American people have to focus on something else, which is the sacrifice and the service that is given by our law enforcement officers,” Barr told the crowd. “And they have to start showing, more than they do, the respect and support that law enforcement deserves―and if communities don’t give that support and respect, they might find themselves without the police protection they need.”

One way to read Barr’s comments is as a not-so-thinly-veiled threat to communities, particularly communities of color, that have serious and legitimate issues with how they are treated by law enforcement. The “respect and support” portion of the comment is pretty straightforward and a common refrain among law enforcement that bristles at criticism. Barr is America’s top cop, after all, and has said similar things in the past. “There is another development that is demoralizing to law enforcement and dangerous to public safety,” Barr said in a speech earlier this year. “That is the emergence in some of our large cities of district attorneys that style themselves as ‘social justice’ reformers, who spend their time undercutting the police, letting criminals off the hook and refusing to enforce the law.”

In the context of those comments, and the entirety of the Trump administration, what “communities” he’s referring to is pretty clear. What’s less clear is what Barr means by his statement that those communities “might find themselves without the police protection they need.” Does he mean it in a Trump-to-Ukraine kind of way: I’d hate to see something happen to all that U.S. military aid you’re relying on to keep yourselves safe. As in, does he mean it as something that could be explicitly taken away for communities that aren’t sufficiently enthused? That would be an extraordinary―and deeply problematic―thing for the attorney general to say, and it’s how some have interpreted his comments.

A more benign interpretation of Barr’s comments is: If police are vilified, it is harder to get people to do police work, which, in turn, could make it difficult―or even impossible―to perform the vital functions of law enforcement anywhere. Hence, communities could end up with inadequate policing services. Barr’s reference during his speech―and in previous remarks―to how soldiers were treated returning home from the Vietnam War suggests this reading. “In the Vietnam era, our country learned a lesson. I remember that our brave troops who served in that conflict weren’t treated very well in many cases when they came home, and sometimes they bore the brunt of people who were opposed to the war,” he said. “The respect and gratitude owed to them was not given. And it took decades for the American people finally to realize that.”