A third British warship is heading to the Gulf to join the mission to protect shipping amid heightened tensions in the region.

Portsmouth-based HMS Defender, a Type 45 destroyer, is being redirected from its mission to the Pacific.

Britain has already sent HMS Kent to cover for frigate HMS Montrose while it undergoes maintenance in nearby Bahrain.

‘Wherever the red ensign flies around the world, the UK stands by to protect freedom of navigation whenever is it tested,’ said Defence Secretary Ben Wallace. 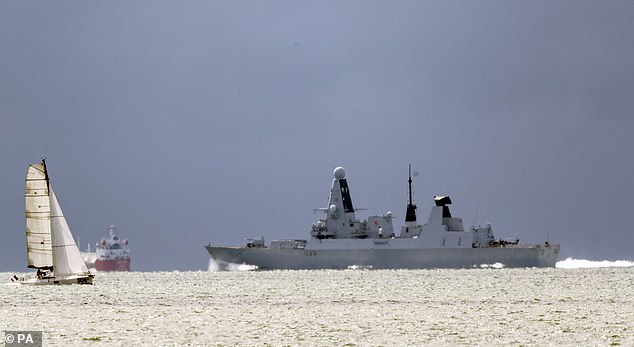 Portsmouth-based HMS Defender, a Type 45 destroyer, has become the third British warship to head to the Gulf to join the mission to protect shipping. The ship is pictured earlier this month

The Government confirmed earlier this month that the Royal Navy has been tasked to accompany British-flagged ships through the Strait of Hormuz, as part of the International Maritime Security Construct (IMSC).

This deployment will ensure that the UK has the flexibility to continually commit a vessel to the international mission, said the Navy in a statement today.

Defence Secretary Ben Wallace said: ‘The men and women of HMS Defender will contribute to the IMSC alongside international partners.’

Britain outraged Iran by seizing one of its tankers – the Grace 1 – on July 4 on suspicion it was carrying oil to Syria in violation of EU sanctions. 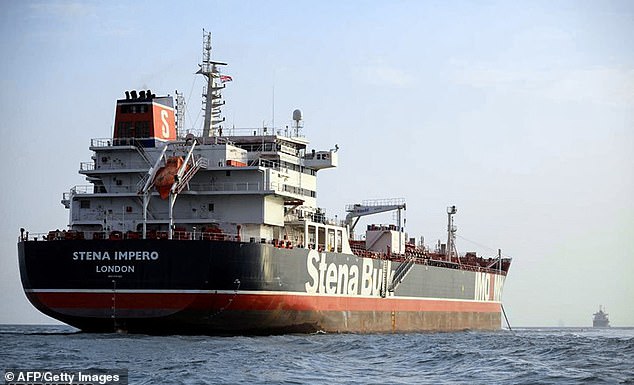 British-flagged tanker Stena Impero, pictured, was seized by Iranian commandos in the Strait of Hormuz for alleged marine violations last month. The British Government raised the alert level for ships travelling through Iranian waters to ‘critical’ after the incident 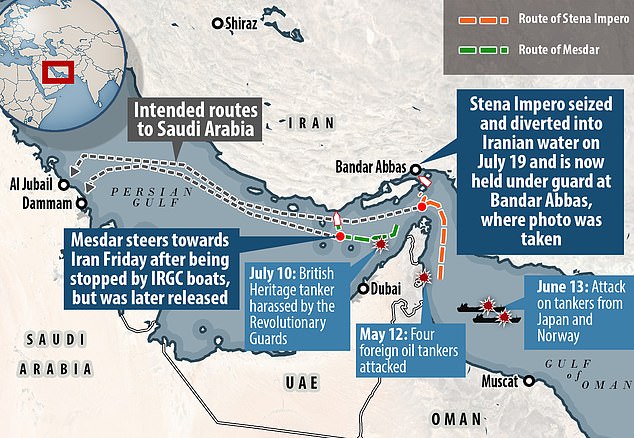 The Stena Impero was surrounded by Iranian Revolutionary Guard forces at 4pm on July 19 and ordered to head north. This map shows how events unfolded

The HMS Montrose then warned off three Iranian gunboats that UK officials said were trying to ‘impede’ the progress of a British supertanker through the Strait of Hormuz in the Gulf on July 11.

Iranian Revolutionary Guards stormed and detained the UK-flagged Stena Impero and its 23 crew as they sailed through the Strait of Hormuz on July 20.

The British government subsequently raised the alert level for ships travelling through Iranian waters to three on a three-point scale, indicating a ‘critical’ threat.

Tensions have been escalating in the region, with US President Donald Trump in June calling off at the last minute an air strike on Iran over its downing of a US spy drone.

The HMS Defender sailed from Portsmouth on August 12, alongside HMS Kent, which was also heading to the Gulf to replace the HMS Duncan.

TIMELINE: What is happening in the Strait of Hormuz?

July 4: Britain seizes an Iranian oil tanker the Grace 1 near Gibraltar, accusing it of violating sanctions on Syria.

July 11: The British HMS Montrose confronts Iranian vessels that tried to block a British-flagged tanker in the Strait of Hormuz.

July 12: HMS Duncan, a Type 45 destroyer, is sent to the Gulf to replace Montrose.

July 18: Iran confirms it seized the MT Riah, a UAE-based vessel, and claims it was ‘smuggling one million litres of fuel’. The ship had sent a distress call.

July 21: Iran hoists its flag over the Stena Impero a day after Britain reported Iran to the United Nations.

July 28: British destroyer HMS Duncan arrives in the Gulf to replace HMS Montrose. The ship had spent the past 28 days on patrol.

July 29: Iran’s President Rouhani pens an open letter to Boris Johnson, saying he hopes the countries’ diplomatic ties will be stronger under his leadership.

August 4: An Iraqi tanker is intercepted by Iran near Farsi Island and escorted to the south west coastal city of Bushehr. It was accused of smuggling 700,000 litres of fuel.

August 5: Defence Minister Ben Wallace announces the UK will join forces with America and others to ‘find an international solution to the problems in the Strait of Hormuz.’

Iran’s foreign minister says the country will no longer tolerate ‘maritime offences’ in the region.

August 8: US Department of Transportation’s Maritime Administration warns merchant ships of Iran reportedly sending fake signals to vessels in a bid to send them mistakenly sailing into Iranian waters.

August 11: Iran‘s Revolutionary Guard shared a video in which they claimed to be pursuing a Royal Navy destroyer, but experts reveal it was most likely a UAE vessel.

August 12: Type-23 frigate HMS Kent leaves Portsmouth Naval Base to take over duties in the Strait of Hormuz from Type 45 defender HMS Duncan.

August 15: US tries to block the release of the Grace 1 but Gibraltar lets it go on written assurances from Tehran that it would not travel to Syria.

August 17: Iran changes the name of its tanker Grace 1 to Adrian Darya as it prepared to leave Gibraltar.