A tourist hands her luggage to security guards as she tries to enter the departures gate during another demonstration by pro-democracy protesters at Hong Kong’s International Airport on Tuesday.
Philip Fong/Agence France-Presse/Getty Images
•••••
Updated Aug. 13, 2019 6:20 am ET

The airport suspended all check-in, and advised people not to go to the airport. The status of dozens of remaining evening flights wasn’t immediately known. The day began with small numbers of black-clad protesters dotting the arrival hall, some playing the violin and singing. But their numbers swelled quickly late in the afternoon and filled the departure area as well.

“There is potential for further flight disruptions at short notice,” Cathay Pacific , the territory’s flag carrier, said in an update for travelers.

Demonstrators stationed themselves in front of the doors leading to security checks and departure gates and used luggage carts to barricade their positions. Many wore masks to hide their faces. 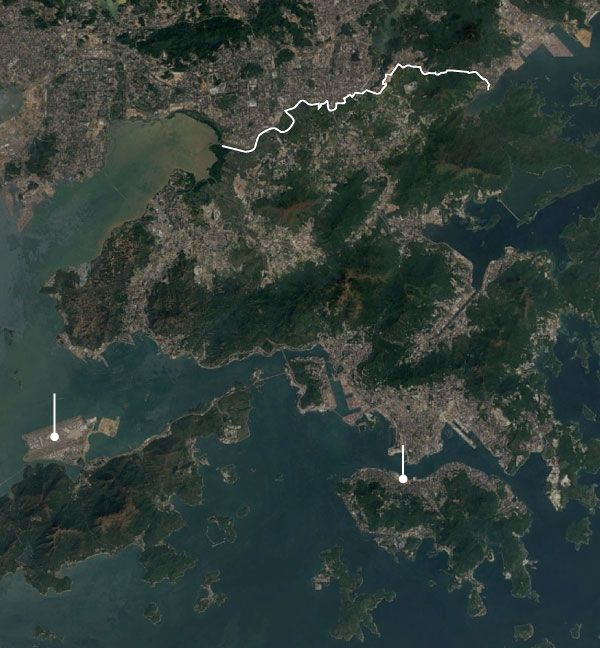 The Webb family was stranded in the departure area at 5 p.m. Tuesday. They had their boarding passes but weren’t sure whether they could get through for a 7:45 p.m. flight home to London and debated trying to push through the wall of people.

“I don’t want to be seen as not supporting it,” said Katrina Webb.

“We’re not not supporting it,” her brother Seb Webb said. “There’s protesting for a cause, then there’s just getting in the way.”

Tuesday’s disruptions were a further blow to Cathay, which has come under heavy pressure from China over employees who join the protesters.

On Monday, the airline said it would fire staff who participated in unauthorized protests. On Tuesday, parent company Swire Pacific said it shared the Chinese government’s view of the city’s future and condemned what it called illegal acts that threatened the “one country, two systems” principle under which Hong Kong maintains some autonomy under Chinese rule.

“We resolutely support the Hong Kong SAR Government, the Chief Executive and the Police in their efforts to restore law and order,” Swire said in a release.

An overwhelming turnout a day earlier forced the airport to halt all outbound flights. The airport was still contending with those cancellations Tuesday, with hundreds of morning and afternoon flights taken off the board and dozens of others delayed.

“Protesting in the airport is the best way to tell the world what’s happening in Hong Kong,” said Jade Yai, 16, who had been handing out fliers alleging police brutality in the airport to travelers since the early morning.

Earlier in the day, when the crowd of protesters was still small, shouting matches broke out between frustrated travelers—including one who wore a hat bearing the Chinese flag—and demonstrators. Airport security teams quickly ushered the travelers away from the protesting crowd. There were also lighter moments, with protesters playing the violin and singing.

Protests have embroiled Hong Kong this summer, sparked by a proposed law that would have allowed the Chinese government to extradite and prosecute Hong Kong citizens. A broad swath of the city rallied in opposition to the law. Hong Kong’s government declared the bill dead in response, but thousands of Hong Kongers continue to demonstrate, calling for an inquiry into police conduct and a more democratic government.

The protests have greatly disrupted the efficiency and predictability that have made Hong Kong one of the world’s leading hubs for trade and finance.

Dennis Qiu, a 28-year old photographer who works for a media company in the Chinese coastal city of Xiamen, arrived in Hong Kong on his way home Monday afternoon following a work trip to Bulgaria. When his connecting flight was canceled, he waited inside the airport for three hours.

“For a second, I was afraid things might turn violent,” he said.

Not wanting to stay in Hong Kong, Mr. Qiu purchased a ferry ticket from the airport to Shenzhen but couldn’t board because the line was too long. He left the airport and paid a private driver about $250 to take him to Shenzhen and stayed there overnight.

Tuesday afternoon, he took a three-plus-hour train ride train back to Xiamen. It turned out to be the right decision, he said, because his rescheduled flight from Hong Kong to Xiamen was canceled Tuesday.

—Preetika Rana and Stella Yifan Xie contributed to this article.

Hezbollah Says It Shot Down Israeli Drone At Lebanese Border